A Visit to the Decalogue Stone at Hidden Mountain

A week ago, I had the opportunity to visit the famous decalogue or “ten commandments” stone outside of Los Lunas, New Mexico. I didn’t have much time to spend with it, but I was able to snap some up-close photos which can be hard to find. I’ll have to admit, I love stuff like this. I felt a little bit like Indiana Jones tracking down some kind of ancient artifact.

Finding the entrance to the mountain is a little tricky. I wasn’t sure where to find the way over to the mountain because there was fencing all along the way with no roads in. I followed the road along the fence up to this small, white checkpoint and found that it was the entrance to a dump. I told the guy that I was looking for the stone and he knew exactly what I was talking about; it was apparent that I wasn’t the first to have asked him about this. He instructed me park about 50 yards away and go through this gap in the gate.

There was a road there, all I had to do was follow it, and my GPS, to the stone.

It wasn’t as large as I thought it would be from other photos that I had seen, and upon immediate inspection, I got the impression that the engravings could not be as old as some people think they are. Now I am not an archaeologist or a geologist but I have seen several petroglyphs, etc in my time and I didn’t really get the impression that they were ‘ancient’.

The one puzzling thing about the engravings is the type of Phonecian that they are written in. From Wikipedia:

The first recorded mention of the stone is in 1933, when professor Frank Hibben, an archaeologist from the University of New Mexico, saw it. Hibben was led to the stone by an unnamed guide who claimed to have found it as a boy in the 1880s. The 1880s date of discovery is important to those who believe that the stone was inscribed by a lost tribe of Israel. The Paleo-Hebrew script is practically identical to the Phoenician script, which was known at the time, thus not precluding the possibility of fraud. One argument against the stone’s antiquity is its apparent use of modern Hebrew punctuation, though amateur epigrapher Barry Fell argued that the punctuation is consistent with antiquity. Other researchers dismiss the inscription based on the numerous stylistic and grammatical errors that appear in the inscription…Because of the stone’s weight of over 80 tons, it was never moved to a museum or laboratory for study and safekeeping. Many visitors have cleaned the stone inscriptions over the years, likely destroying any possibility for scientific analysis of the inscriptions’ patina. Nevertheless, comparing it to a modern inscription nearby, geologist G. E. Morehouse, a colleague of Barry Fell, estimated that the inscription could be between 500 and 2000 years old.

One thing was for certain though. I noted the depth of the engravings compared to some of the graffiti that was around and I’ll have to admit, whoever carved these 10 commandments had a lot of time on their hands. It was certainly a task that must have taken several hours to do, if not days in my estimation. I’ve posted some photos below with some comments. 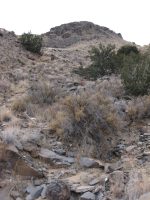 The trail up to the mountain

The view as the stone as you come up the path

Actual angle of the stone

This says “Jehovah” in Hebrew

This is some modern graffiti. Note the depth and sloppiness of it, very shallow and messy while the other carvings are deeper and more deliberate.

I first heard of the stone over a decade ago from an acquaintance. He had toured the stone with a Jewish guide who believed the stone was authentic. This acquaintance of mine had another interesting theory about the stone’s origins. He theorized that the stone was carved by someone in the Mormon Battalion as they may have passed through that area. Some of the members of the Mormon Battalion participated in the school of the prophets where ancient Semitic languages were studied. The stone could have been just the etchings of a bored solider, which would explain some of the typos and errors in the text.

Here is a rough translation of what the stone actually says:

There are other petroglyphs on this mountain however that point to ancient origins of the decalogue stone. There is another stone higher up the mountain that has constellations carved on it. These carvings show many of the signs of the zodiac with one particular image of a partial solar eclipse and the constellation scorpio. Astronomers have found that this particular solar event would have taken place  in 107 B.C. which coincides with the dating of the engravings to around 2,000 years ago.

Authentic or not, it was a pretty fun place to visit and it’s too bad that vandals have taken to the destruction of some of the engravings. Honestly, I can’t really make up my mind on this thing, if it is authentic or not, I am about 80% sure that the engravings were probably done within the last 150 years or so at least. The Mormon Battalion theory makes the most sense to me, but there really isn’t any evidence to back that one up. Who knows, they’re always discovering new facts about some of these things as new evidence is dug up out of the ground elsewhere in the world. We’ll just have to wait and see.

Here’s a nice long post with a breakdown of some of the fascinating things associated with Hidden Mountain and it’s amazing artifacts: Turning Right at the Burning Bush, Reflections on a National Treasure from Ancient America

Oh wow, I don’t think I’ve ever seen anyone produce a film about the Mystery Stone. I’m going to check it out, thanks!

I still think the stone is a more recent production but a part of me is fascinated by the possibility that there is a richer history behind it that is more than meets the eye. Who doesn’t like a good mystery ;)

Ok Aaron, I finished watching your film and you had some good stuff in there. I’m glad that you included the information on the zodiac at the summit of the mountain because that is probably the most compelling aspect of the whole place since it points to a historical event that can be corroborated. The scholars had some interesting takes on the text. I thought of another scenario as I was watching your video that leans toward the authenticity theory. Let me know what you think about it… If we assume that because of the remote location of the stone… Read more »

I have visited the stone many times. Once I even met up with David Deal there who wrote the best book on it that I know of. I don’t, however, agree with his, and others, conclusion that it’s pre-Columbian. I say this because about two feed to the left (as you face the stone) is another stone with a couple of chiseled lines carved with an obviously beveled masonry chisel. Upon close inspection of the Decalogue stone, one can see the beveled nature of the carving on many of the glyphs. So if a steel chisel was used, it is… Read more »

You know, I think I agree with you. I don’t think it is that old. It was probably done in the 1800s, but the real question is by who and why? If it was a hoax why wasn’t there more of a buzz and some guy going around claiming that he found an ancient relic. How many people knew how to write in that old form of Hebrew at the time? After seeing it myself it didn’t look as ancient as some of the Indian petroglyphs I’ve seen. Typically, those rocks have a patina on them. However, if the story… Read more »

ancient chisels have been found in various places, and are not hard to produce from basic smelting of iron ore and then hammering out

True. Don’t rule out copper or even just rubbing the letters in with other rocks. The decalogue stone letters looked rubbed in rather than chiseled in.

I took a rock and rubbed it on a boulder nearby and although it would take some time, I don’t see why you couldn’t replicate those letters that way.

My research is to better define routes used by the Mormon Battalion (MoBat) during their enlistment year of July 1846-47. My background is geology/geography with considerable experience in photo interpretation. My wife and I hiked the entire Battalion main route in 2008-09 conducting field research. Occasionally I see these articles/posts that postulate a connection between the MoBat and the Decalogue Stone. I’m not sure, but I think if was ‘discoverer’ Frank Hibben himself who first implied that perhaps the MoBat may have created it since they were “active in the area”. Truthfully, they were marching pretty fast through the area… Read more »

Great stuff, Kevin. I think you have put that theory to bed. It would have taken many hours to create that inscription and your research suggests that this would not have been likely given numerous factors. The MoBat theory was one explanation postulated by a guy I knew who was very smart but I don’t think he was as well informed about the Battalion as you seem to be. He never presented any evidence other than they were passing through the area and some may have studied Hebrew in the school of the prophets. Thanks for your contribution to this… Read more »

As a follow-up to my prior post and in expectation that someone may want to actually do some quantifiable science: A mobile, field-capable Raman spectroscopy could be employed to look for evidence of any metal embedded in the etching. My suspicion is that many subsequent visitors have used knives and other tools to ‘refresh’ the original etching, but it might be possible to detect really old metal fragments which could be evaluated for the isotopic content. This might be able to rule in/out very old metal being used to etch the inscription. A specialist in Raman spectroscopy should be consulted… Read more »

That’s a really cool idea, I don’t know you would talk to to get that set up. The rock is just out in the middle of the desert and nobody seems in charge of it.