Bishop Dean M. Davies begins by sharing a story that involved the selection of a temple site with Gordon B. Hinckley. While on the surface the story itself isn’t all that impressive to me personally. One side of my mind says that this was merely a matter of selecting a different site out of many that could have equally worked.

President Hinckley was a senior man with decades of experience, insight, and intelligence and had an idea in his mind of what to look for. The implication is that the Lord was directing all of this and I’m not saying that he wasn’t. On the one hand, this isn’t a mind-blowing story, it’s not parting a sea or translating ancient scripture, but on the other, maybe there is a different message.

The Voices of the Prophets

Junior Ganymede has become one of my favorite blogs. I thought this post was interesting and timely, particularly the point about the many voices we hear today. It’s true, nothing has changed in human nature, it’s only the voices that continually change (both in rhetoric and in volume). Without a foundation, you never know what to expect from the mocking voices emanating from the great and spacious building.

Come on, Elder Kimball, I thought. You can’t really expect me to believe there were millions of perverts running around, even in the 70s. You are telling me a stretcher.

I was reading what President Kimball said at the first session of the April 1971 conference and I just wasn’t buying it.

But he was right and I was wrong.

As I read on, I saw that he didn’t just mean pedophiles and folks with outlier sexual quirks. He wasn’t even referring to Les Gibituqs, as would have fit with the blunt way they talked back then. He meant cads, sluts, fornicators, being too sex-minded in general, embracing birth control as an entitlement because sex was seen as a right and a demand . . . . He meant most of us in America 2015. END_OF_DOCUMENT_TOKEN_TO_BE_REPLACED

“The Tyrant and the Servant in the Prophecies of Isaiah and Other Prophets.”

Bible prophecies predict that two major figures will appear suddenly on the world stage to usher in the time of Jehovah/Jesus’ coming to reign on the earth. Directly impacting the destinies of all nations and peoples are a tyrannical Antichrist who causes worldwide devastation and God’s servant who delivers an elect remnant of Israel’s tribes in a new exodus to Zion.

As an exemplar of righteousness, the servant prepares a people to meet their God. As an exemplar of wickedness, the tyrant gains the whole world only to lose his own soul. A polarization of peoples worldwide, characterized by extremes of wickedness and righteousness, accompany a three-year period of warning followed by three years of destruction and deliverance in God’s Day of Judgment.

What was to be and what is

While pondering the blessings that surround us in our time, I also considered the many distractions and noise around us that pollute our thinking and our peace.

I thought about how many prophets lived and died over the course of millennia who saw through eyes of faith the future that was not yet, but would one day be. I found it easy to be envious of these prophetic powers, spiritual gifts and the grand visions of what was to be.

As I turned a corner, I looked out across the city where I live and saw the Las Vegas temple shining in the sun at the foot of a mountain. God was listening to my pondering and unveiled some truth to my understanding in His unique way. Seeing with new eyes, I was crushed at the realization that I was beholding with eyes of flesh the literal fulfillment of the visions of the past. There stands the work of God before my eyes and all around me and I stand as a living witness of promises fulfilled and can drink from those waters at my leisure.

They were privileged to behold what was to be while we are witness to what is. 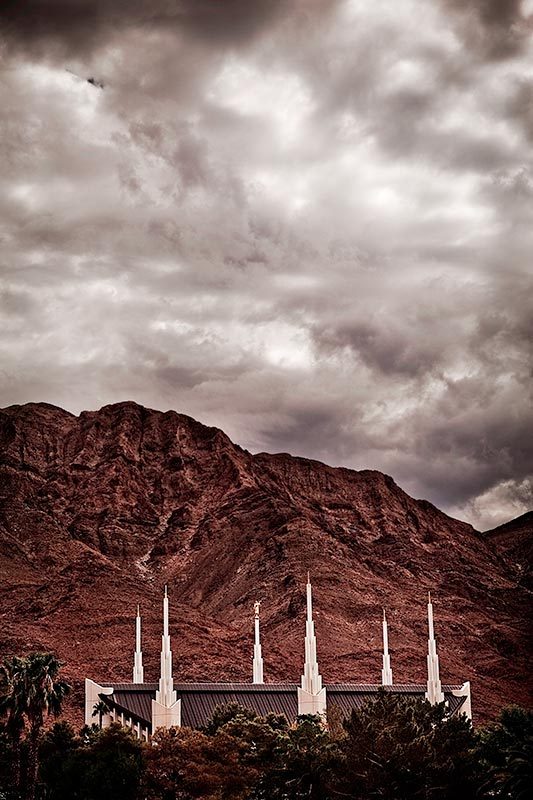