Saved by Grace, Judged by Works?

I was thinking about the whole grace/faith/works debate that seems to endlessly rage between the faiths.

Now we all technically believe in salvation by grace, or in other words, salvation is impossible without grace through the atonement of Jesus Christ. The disagreement seems mainly around how that grace is applied and what man’s role, if any, is in this process of salvation. All sides of the debate would probably agree that some kind of an acknowledgement of Christ’s atonement and grace on behalf of the individual is necessary in order to receive it, but at what point is one “saved”?

What frustrates me is how people on all sides of the debate seem to do a real hack-job on interpreting the doctrines of the other faiths. Let’s take Latter-day Saints and Evangelicals for instance.

“Those crazy Evangelicals, they think just because they prayed a prayer, they can go out and murder, commit fornication, beat their kids and sin all they want because they are saved!”

“Those crazy Mormons, they are just completely focused on doing good works to be saved, Jesus is never mentioned, they just refer to their endless checklist of deeds to do for the day.”

Yes, I realize that I’m being a tad over-the-top here but these views are not too far off from what I hear people actually assuming about the doctrines of the other and it drives me nuts. These examples do not express the legitimate views of either faith in any way, but it seems practically impossible to get people to understand one another. We don’t have to agree with one another, but we can understand one another. 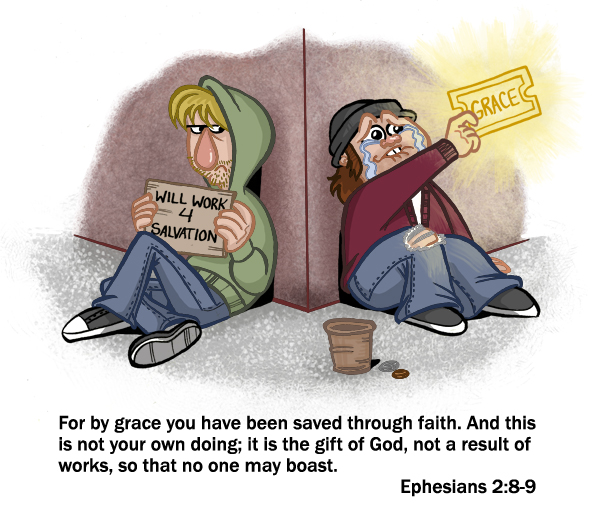 The whole reconciliation between the principles of grace, faith and works, is no mystery to me and is fairly easy to explain, but I thought I’d do something a little different for my LDS and non-LDS readers.

As I was pondering all these things I was reminded how many times the scriptures mention that we will be judged according to our works. If works were unnecessary then why would we be judged by them at all? This thought interested me so I Googled the phrase “saved by grace judged by works” and I came across New Testament Professor J. R. Daniel Kirk‘s blog, “Storied Theology” where he posted some very interesting thoughts on the issue in an article titled “Saved by Grace, Judged by Works?“.

Where it gets more interesting is the comments, that I highly suggest reading because the conversation is quite fascinating. I was very impressed to see a stream of non-Latter-day Saint commenters discussing the topic in a manner that would be welcome in any Latter-day Saint gospel doctrine class. Here are a few that I found very refreshing:

…the real problem is for those in Evangelical circles who hold to an oversimplified Lutheran model where the gospel = Justification. I wonder how much longer this view can hold in light of the tremendous amount of recent pauline and NT scholarship that challenges this view.

Two things come to mind.
1) Salvation by “faith” it seems to me is not purely a one time “I believe” moment. It is that, but not only that. Abraham lived a life of faithfulness to God (albeit imperfect). Grace was still in play with his imperfections.
2) So many NT texts speak to warnings about missing this:
– Heb. 3:12 Take care, brethren, that there not be in any one of you an evil, unbelieving heart that falls away from the living God. 13 But encourage one another day after day, as long as it is still called “Today,” so that none of you will be hardened by the deceitfulness of sin. 14 For we have become partakers of Christ, if we hold fast the beginning of our assurance firm until the end,
– Heb. 4:1   Therefore, let us fear if, while a promise remains of entering His rest, any one of you may seem to have come short of it.
– Heb. 10:26   For if we go on sinning willfully after receiving the knowledge of the truth, there no longer remains a sacrifice for sins, 27 but a terrifying expectation of judgment and THE FURY OF A FIRE WHICH WILL CONSUME THE ADVERSARIES. 28 Anyone who has set aside the Law of Moses dies without mercy on the testimony of two or three witnesses. 29 How much severer punishment do you think he will deserve who has trampled under foot the Son of God, and has regarded as unclean the blood of the covenant by which he was sanctified, and has insulted the Spirit of grace? 30 For we know Him who said, “VENGEANCE IS MINE, I WILL REPAY.” And again, “THE LORD WILL JUDGE HIS PEOPLE.” 31 It is a terrifying thing to fall into the hands of the living God.

Any statement about judgment and God’s people has to deal with these texts written to God’s people.

That said, I do think one cannot speak about grace enough. Grace is what motivates and empowers us toward good works (Eph. 2:8-10). The deeper confidence I have in grace & salvation, the more I can freely give up myself in sacrifice to others – it’s really nothing relative to what God is supplying. That deep awareness of grace is missing for many Christians; it is not something to treat flippantly but it is to result in good works and the denial of ungodliness (Titus 2).

As someone who often comments in disagreement, here I want to register my agreement. I am perturbed by the quasi-lutheran model that simply refuses to look at all the ‘whole counsel of God’.

That being said, it is difficult to find the best form of words for holding the tension of justification by faith and justification by works. I do not think ‘faith and works’ is helpful. Certainly not ‘faith without works’. Even less ‘works without faith’. Faith evidenced by works is still for me the best shorthand.

perhaps it is safer to say, however, there is no ‘shorthand’ that is satisfactory. Faith needs definition as does works and the pastoral context contols the emphasis.

To speak of our ‘faith’ being in the blood of Christ as the security for our eschatological salvation may miss the mark. Our faith should be in ‘the God who raised from the dead Jesus, our Lord’ (Rom. 4:24), believing that ‘He is, and that He earnestly rewards (on the last day) those who seek Him’ (Heb. 11:6).

Christ’s death is the once-for-all sacrifice which both inaugurates the new covenant and sustains it, meaning that for all those who are new-covenant members, there is always forgiveness and reconciliation in so far as you confess your sins and repent towards God. Now, I know this probably raises questions about the mechanics of penal substitutionary atonement, but so be it. I’m not so sure the whole ‘God’s eschatological wrath being poured out on Jesus’ is sufficient.

That being said, the new covenant inauguration is also what does away with the Mosaic Law and brings in the age of the Spirit, who directs our hearts and minds into Christ (as opposed to Torah) as we participate in his righteousness (which is not to say we are given his active and passive obedience, whatever that means). For those in Christ who, by the Spirit, ‘hunger and thirst for righteousness’ (Matt. 5:6), God will declare a favorable judgment on the last day.

Then, like icing on the cake, the final comment by one Christina Belton eloquently knocks it out of the park in one simple paragraph:

“I struggle to grasp the faith/ works concept but this is what’s been coming to my mind of late. In order to receive grace we have to have faith to believe. And faith without action is dead. Therefore true wholehearted faith is acting out what we say we believe. We say we believe in The grace of Jesus… If we really believe that then our behaviour should surely reflect it.

Couldn’t have said it better myself.

Do yourself a favor and read the entire post and comments here: http://www.jrdkirk.com/2012/03/09/saved-by-grace-judged-by-works/

Doctrine Faith Grace Jesus Christ New Testament Perspective Plan of Salvation
Previous ArticleUnderstanding the Justice and Mercy of the Degrees of Glory
Next Article Through the Veil: Pondering the Temple Experience Through Scripture