Remembering brings the power of the past to the present

Link to the Deseret News article

I was listening to the This Week in Mormons Podcast when I heard this chapel mentioned. As I looked at the photos, some things stuck out to me.

I wish there were some better photos of this chapel. The only ones I could find were small and, unfortunately, dark and look like they were taken with a camera phone.

I’d like to see a better view of the front of this building, especially the very front were there are 3 areas with some kind of “cross” or “T-like” motifs towards the top. The number three is connected to the following doctrines or themes:

Symbolically speaking, the numbers 3, 4 and 8 are perhaps the most appropriate to be featured on a chapel considering the purposes of which it exists. 3 signifies divine unity while four expresses mortality and perhaps the Aaronic priesthood in that the square is a sign associate with this authority. Eight is a symbol connected with rebirth and especially Christ and we see a lot of the number eight in LDS chapel construction.

I love the fact that there are such large and numerous windows on the outside of the chapel. This will let in a great amount of natural lighting and light very symbolic, representing truth, intelligence, the Holy Spirit, glory and more.

The windows are divided into 10 segments each and the number 10 potentially references completion, wholeness, and eternal life. 4 sets of 10 equals the number 40, which Val Brinkerhoff observes is closely tied to the number 8 as it relates to purification (I’ll have to post a reference to this later as a friend is borrowing my book which has the quote I’m needing), so it’s quite exciting to discover this in the architecture.

The steeple very prominently evokes the number 4 with its 4 sides and base which deliberately emphasizes the four corners. Note that the 4 in the steeple is upheld by the 3 on the front. 4 + 3 = 7

“Hundreds of scriptures point to 7 in association with the concepts of full, satisfied, or complete, most in connection with spiritual perfection, accomplished in a complete time period involving 7 day, 7 weeks, or 7 dispensations.”
Val Brinkerhoff, “The Day Star: Reading Sacred Architecture” (Book 2), 68

This chapel is where we gather each 7th day to worship on the Sabbath. 4 x 3 = 12 which is a number associated with priesthood power, thus priesthood and perfection are intertwined. 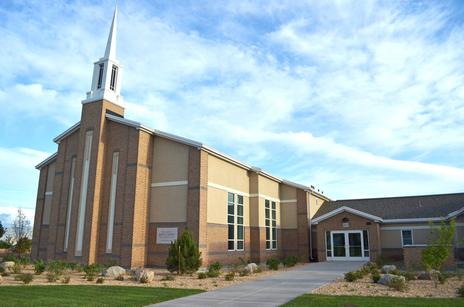 Though you can only make out six, I am almost positive that this chapel has 8 lights like most do today. While they are not pillars, anciently the number 8 was used in shape and in number of pillars to denote sacred space, especially in ordinances relating to rebirth.

The sacrament is a renewal or starting over ordinance so to speak:

“[Eight] is a starting-over number and is pervasive throughout scripture…”
Val Brinkerhoff, “The Day Star: Reading Sacred Architecture” (Book 2), 68

Here’s a quote associated with rebirth:

“Eight-niched soars this temple for sacred rites
Eight corners has its font
Right to build this baptismal hall about the sacred number eight
For here the people are reborn.”
Interior inscription for the baptistry of Milan 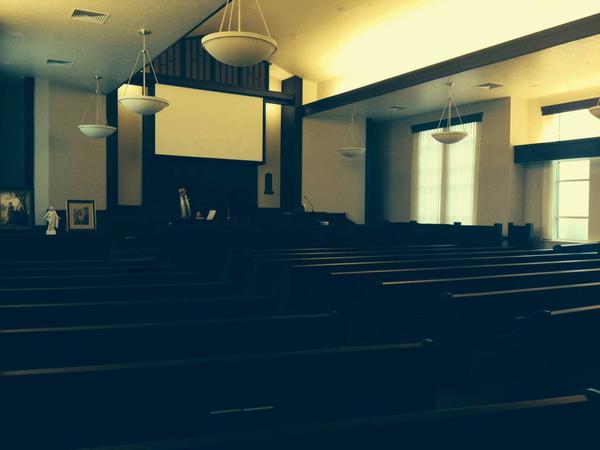 The one thing that makes this chapel really significant is the inclusion of a courtyard. My eye was immediately drawn to the octagon-shaped planter box/bench with a tree growing in the middle of it; this is fantastic.

As described previously, the octagon or number 8 has deep ties to rebirth, especially through Jesus Christ and to see a tree in the middle of an octagon doesn’t seem to be coincidence to me, they could have easily made this planter box a square or circle.

“The Tree of Life is found in the first and last books of the Bible (Gen. 3 and Rev. 2; another Alpha & Omega association) and early on in the Book of Mormon (1 Ne.). The olive tree may be the best example ‘Tree of Life’ since it symbolizes the Love of God (the Father) as demonstrated in the sacrifice of His only begotten Son on our behalf. A major portion of the Savior’s crucifixion occurred on the cross, a substitute tree for most modern Christians.”
Val Brinkerhoff, “The Day Star: Reading Sacred Architecture” (Book 1), 51

So two symbols of Christ are demonstrated here, one focusing on rebirth through his atonement and another demonstrating that he is the embodiment of the love of God. There’s a lot to ponder here, but I really like where chapel construction is headed. 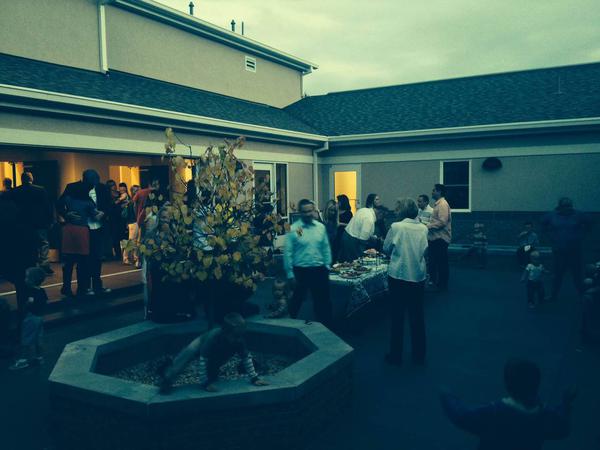 I’d really love to take a tour of this building and see what other potentially symbolic teachings it holds. I love the idea of our chapels being a place where we are surrounded by symbolic motifs to ponder, in the same way, that our temples do.

Kudos to the inspired Church architects for the beautiful simplicity in which they build our chapels.

An introduction to the podcast and a brief dive into symbolism, religious vestments, and a lesson learned from cockroaches. Yes, cockroaches.