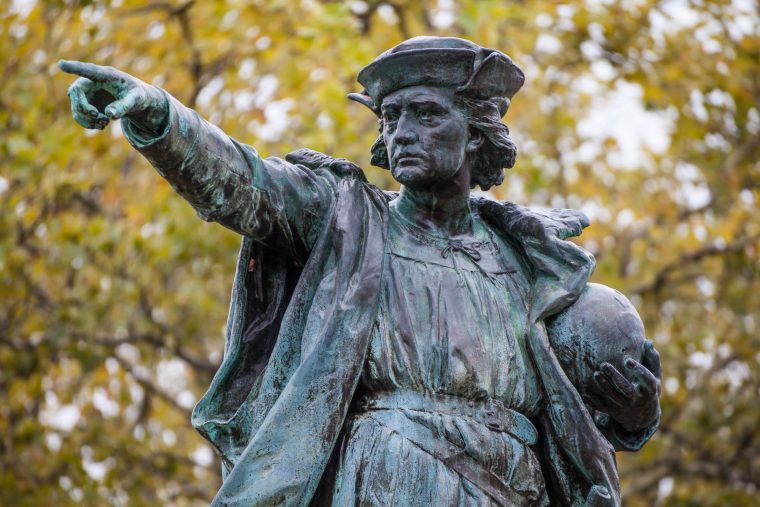 Today at the beginning of Sunday School I was handed a little white slip of paper with some scripture verses to read. Here’s what I read in class:

And it came to pass that I beheld the Spirit of God, that it wrought upon other Gentiles; and they went forth out of captivity, upon the many waters. (1 Nephi 13:12-13)

It was reinforced in the class that the “man among the Gentiles” is Christopher Columbus. I suppose that in reading verse 12 you would think that the Spirit coming down and working upon someone would mean that they were righteous and sent by God to do good. In this country we celebrate Columbus Day and it seems as though many Latter-day Saints hold him with a kind of reverence, see him as a visionary, and perhaps even a prophet of sorts.

God does not always work upon people to bring blessings and happiness, sometimes he sends them as a scourge:

And after they have been scattered, and the Lord God hath scourged them by other nations for the space of many generations, yea, even down from generation to generation… (2 Nephi 5:25)

Lehi prophesied about it:

“Yea, he will bring other nations unto them, and he will give unto them power, and he will take away from them the lands of their possessions, and he will cause them to be scattered and smitten.” (1 Nephi 1:11)

Wait a minute, am I suggesting that Columbus was sent as a scourge, how is that possible? Well I started out by quoting 2 Nephi 13:12, but let’s look at verses 11 and 12 together because the slip of paper didn’t include verse 11.

And it came to pass that the angel said unto me: Behold the wrath of God is upon the seed of thy brethren.

The truth is that Columbus’ arrival was not something that blessed the people. Columbus and his men plundered, enslaved, and indeed scourged the people they found. Noses and ears were cut off if people refused slavery, humans were cut up and used for dog food, and the whole civilization was depopulated through the slave trade, forced labor in mines, and continual plunder.

A Spanish priest named Bartolome de las Casas who was involved helping to conquer Cuba (but later had a change of heart) wrote that the Spaniards were, “killing, terrorizing, afflicting, and torturing the native peoples” and they “thought nothing of knifing Indians by tens and twenties and of cutting slices off them to test the sharpness of their blades…” He said further that his “eyes have seen these acts so foreign to human nature, and now I tremble as I write.”

On the whole, the Gentile arrival to the New World brought scourging, depopulation, scattering, and all the curses we see prophesied in the Book of Mormon. On the whole it is a complex situation; while the Gentiles come to scatter, scourge, and conquer, they bring with them the records of the Jews and of the early Christians. In the darkness that fell over the inhabitants of the Americas through the invasion of the Gentiles, at least there existed a perpetual ember of light in the form of the gospel.

Columbus and the King of Assyria

It’s curious that we celebrate a man who resembles someone more akin to the King of Assyria in Isaiah’s writings.

Hail the Assyrian, the rod of my anger! He is a staff—my wrath in their hand. I will commission him against a godless nation, appoint him over the people [deserving] of my vengeance, to pillage for plunder, to spoliate for spoil, to tread underfoot like mud in the streets. Nevertheless, it shall not seem so to him; this shall not be what he has in mind. His purpose shall be to annihilate and to exterminate nations not a few” (Isaiah 10:5–7)

Let’s compare what the King of Assyria does with some things Columbus wrote and what the Spaniards did to the people in the New World:

“Gold is the most precious of all commodities; gold constitutes treasure, and he who possesses it has all he needs in the world, as also the means of rescuing souls from purgatory, and restoring them to the enjoyment of paradise.” (Spain and Portugal in the New World, 1492-1700, p. 81)

“…there are now many merchants who go seeking for girls; nine or ten are now for sale; for women of all ages there is a very good price to be had.” (Columbus by Launrence Bergreen, p.280)

“Because Columbus captured more Indian slaves than he could transport to Spain in his small ships, he put them to work in mines and plantations which he, his family, and followers created throughout the Caribbean. His marauding band hunted Indians for sport and profit — beating, raping, torturing, killing, and then using the Indian bodies as food for their hunting dogs. Within four years of Columbus’ arrival on Hispaniola, his men had killed or exported one-third of the original Indian population of 300,000.”  (Jack Weatherford, Professor of Anthropology at Macalaster College in St. Paul, Minnesota)

“Columbus designed a tribute system. Spaniards would not deign to dig any gold for themselves, so the natives had to. Every Taino over 14 years of age was to give a hawk’s bell (about the size of a thimble) of gold to the rulers (Columbus and his men) every three months. Upon receipt of the gold, the natives were given tokens to wear around their necks as proof of payment. It was a simple system. When the Spaniards found Tainos without the appropriate tokens, they chopped their hands off and left them to bleed to death, to make examples of them. It is estimated that about 10 thousand Taino died handless that way. The quota was impossible to meet. The natives had to stop growing food and taking care of themselves to try mining gold.” (Link)

“Infants’ bodies are soft, and were quite a tasty treat for the dogs, so the Spaniards regularly fed infants to their dogs, alive, and at times while the horror stricken parents watched. The Spaniards had contests to see who could cut a living person in half with one stroke of the sword. They would test the sharpness of their blades by beheading the nearest handy native.” (Link)

“Instead of hunting foxes, the conquistadors would hunt natives with their dogs in a jaunty outing. The dogs feasted on their hapless prey. The montería infernal became a favorite pastime of many conquistadors, such as Hernando de Soto.” (Link)

“Maybe there were “only” about a million Taino in the Caribbean in 1492. Maybe it was more, or maybe a little less. Whatever the case was, it was history’s most complete extermination of a people of that magnitude. There is nothing to compare it to. Some of the Old Testament’s battles of extermination are quite bloody, but the extermination of a million or so, at that level of decimation, is unique.” (Link)

“They began starving, falling prey to European disease, and all manner of horror, even if the Spanish did not murder them for “sport.” The natives fled as far as they could go: across the island, up into the hills, even to other islands. There was no permanent escape, except by death. Mothers began killing their children before they took their own lives. The Tainos had mass suicides by jumping from cliffs and poisoning themselves, yet the Spanish killed far more, and in ingenious ways. Guacanagarí, Europe’s first ally in the New World, was eventually driven into the mountains himself by the Spanish depredations, dying alone, wandering the mountains of his ruined world.” (Link)

“Experts generally agree that before 1492, the population on the island of Hispaniola probably numbered above 3 million. Within 20 years of Spanish arrival, it was reduced to only 60,000. Within 50 years, not a single original native inhabitant could be found.” (Link)

While I’m not entirely sure that “the man among the Gentiles” was specifically Columbus to begin with, he does seem to fit in many respects and especially when viewed in the context of the wrath of God and what he and his people did to the natives.

History is always, 100% of the time, way more nuanced and complex than we think it is. Many villains are not as completely dark as we once assumed and many heroes were not the shining beacons perfection we assumed they were. This is also the case with many people throughout the scriptures. King David did some disgusting and horrifying stuff, yet his psalms were quoted by Jesus.

When you are dealing with the history of fallen humanity, it is clear why God says that the natural man is his enemy (Mosiah 3:19), but what else does he have to work with? Somehow, in the midst of all the suffering and darkness, there is beauty, hope, and peace.

Judgement is left up to the only one who knows the hearts of all men.

Who is wise? He who learns from everyone. - Simon ben Zoma