Faith is open to the impossible, as well as the possibility of being wrong.

My friend, Richard N. shared this image with me, and I thought it was fantastic. What is lacking in artistic skill is made up for in composition and message which I will attempt to break down as intricately as I can. The artist is Sr Grace Remington OCSO, a Cistercian Sister of Our Lady of the Mississippi Abbey, Dubuque, Iowa. 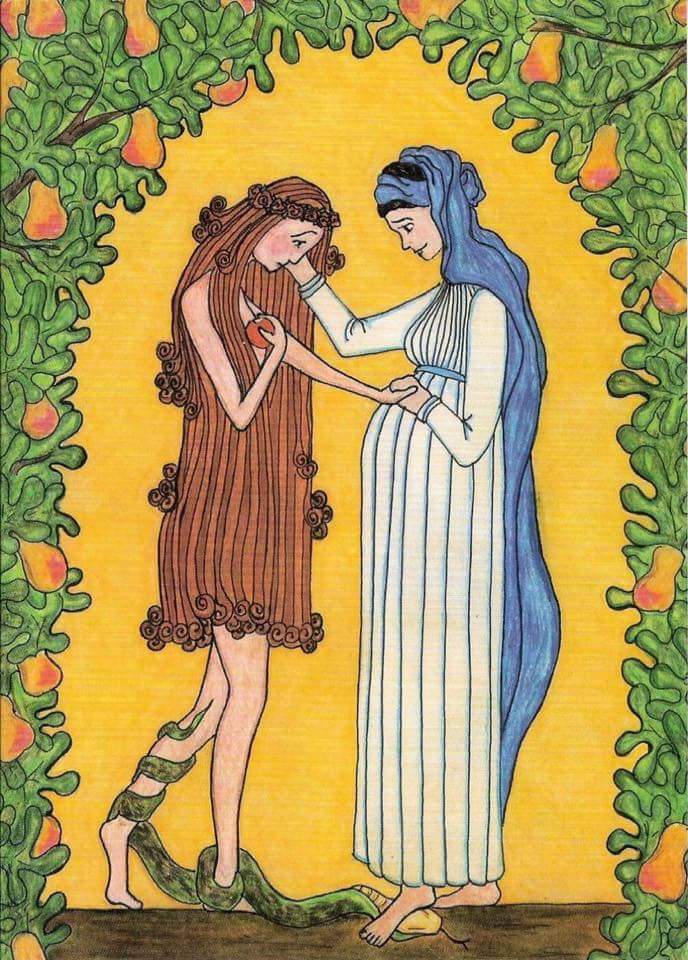 The background and frame

The warm, golden glow of the background dominates the composition almost like a bright light or the sun. To me, it feels like a divine presence approves of and unifies the scene.

Fig leaves and figs frame the two women with an arch. In the book of Genesis, Adam and Eve make aprons from the leaves of a fig tree to cover their nakedness. (Genesis 3:7). The tree that Eve partook of is thought by some to be a fig tree (The Day Star: Reading Sacred Architecture, Book 1, 51).

Figs contain numerous seeds which makes them a good metaphor for fertility and posterity (Symbols.com). Jesus also uses the example of a fig tree to illustrate how one may understand the signs of his second coming in glory (Mark 13:28).

Eve appeared sad to me at first, but then I noticed how she holds the fruit to her heart with her right hand while reaching out with her left to touch Mary’s belly and hand.

Eve’s left arm forms a straight line between her heart, the fruit, and Jesus in the womb. Her right arm creates a perfect “V” shape that directs the eye down to the serpent at her feet.

What Eve may or may not be wearing isn’t visible; instead, she is covered in flowing hair which could be a reference to 1 Corinthians 11:15 “But if a woman have long hair, it is a glory to her: for her hair is given her for a covering.” She has what appears to be a crown of curls which reminds me of Jesus’ crown of thorns.

Adam and Eve were both called Adam by God in Genesis 5:2 “Male and female created he them; and blessed them, and called their name Adam, in the day when they were created.” Eve’s hair is reddish-brown which may be a reference to the name Adam since it means “ruddy” in Hebrew and ruddy means “reddish in color.” (Strongs Concordance)

The flowing reddish locks with spiral-like curls remind me of life and posterity that came forth from Eve. Spirals can represent life and creation. (LDSSymbols.com)

The Feet and the Serpent

Eve’s legs appear entwined by the serpent’s body and tail perhaps indicating his beguiling of Eve, yet her left foot is up and moving forward. She progresses despite the serpents attempt to ensnare her. The tip of the serpent’s tail creeps up Eve’s left leg and weakly points straight to Mary’s belly. Eve’s right foot is firmly locked down to the brown earth by the serpent. I think of the serpent’s role in the fall and how it brought death to humanity.

As we follow the serpent to Mary’s feet, we see that its head is upside down and pinned by Mary’s left foot. Genesis 3:15 and Moses 4:21 similarly state “And I will put enmity between thee and the woman, between thy seed and her seed; and he shall bruise thy head, and thou shalt bruise his heel.” At no point does the serpent display any power over Mary; she dominates.

Mary’s left leg appears straight and leads directly up to her womb which is supported by the vertical pleats in her dress. Mary’s forearms a straight line between her belly and Eve’s eyes. She touches the left cheek of Eve with her right hand in a gesture of comfort.

Mary wears a white pleated robe which resembles the style of modern LDS temple robes which reminds me of how temple work plays a vital role in the redemption of all God’s children.

Mary’s headdress is blue, the color of the sky, and is used to depict that which is godly, spiritual, or heavenly. (Alonzo Gaskill, The Lost Language of Symbolism, p.89) It appears to resemble a cross with water flowing down her shoulder, back, and almost down toward her feet where the serpent is.

The dual symbolism of the cross and water metaphor reminds me of Nephi’s vision where he observes that both the tree of life and fountain of living waters are both representations of the Love of God. (1 Nephi 11:25)

Nephi’s vision connects the Virgin Mary with the tree of life and the fountain of living waters while Jesus is the fruit of the tree. Jesus’ crucifixion is a literal fulfillment of the vision as he (the fruit) is placed upon a tree (cross). Thus the cross/tree/water connection is all summed up in Mary’s headdress here in the artwork.

Mary is touching the head of Eve potentially directing it toward her belly as Eve holds the fruit to her heart. Eve gazes down knowing that even though her actions caused the fall, redemption will come through her seed. Mary looks down at Eve’s fruit to acknowledge Eve’s act that made the birth of the Savior possible.

These two matriarchs become the pillars of mortal and eternal life, not just because they bore children, but due to their choices which were vital in making the entire plan work.

Thoughts After Listening to the Podcast

I wrote all of this before discovering and listening to Pat Gohn’s podcast, Among Women, where Sister Remington is interviewed and talks about this piece of art. My initial analysis was not influenced by any knowledge of the artist’s intent, but I wanted to take a break to listen to the podcast for further insights.

Sister Remington gets to the artwork itself at about 30:50 in the podcast. I was disappointed that there was hardly any talk about the symbolism of the artwork.

I was expecting to hear some rich, intricate ideas that went beyond or confirmed some of my ideas. I don’t know how much conscious thought Sister Remington put into the intricacies of the design. Either she possesses some in-depth knowledge and understanding of scripture that manifested subconsciously or perhaps a great deal of unconscious inspiration was flowing as she created her art. Either way, I think Sister Remington is a talented woman blessed with unique gifts.

While not considering herself a professional artist, she talked about how she likes to doodle while she ponders and studies (which I enjoy doing as well). She says that the inspiration for the artwork came while playing with the idea of the difference between Mary and Eve. Mary’s experience of living in a fallen world caused her to realize that we cannot stand alone in life. The podcast host, Pat Gohn, suggests that embrace reflects a degree of familiarity between the two women. Pat notes the historical “bad rap” that Eve has received because of the fall and how this illustration seems to defy that notion.

Remington notes that Eve is called “the Mother of all living” (Genesis 3:20) and how Mary could share that title by bearing Jesus Christ. She talked about how Eve was still clutching the fruit and how that can represent the way we are still holding on to things that we shouldn’t. I think this is an interesting idea but in an LDS paradigm, this clutching of the fruit and its juxtaposition with her heart, left arm, Mary’s gaze and womb, can convey the wisdom of Mary in progressing God’s plan. I like to think that there’s much more Sister Remington had in mind when she created this image and I wish I could have a conversation with her myself.

Overall, I love this piece of artwork for the potential metaphorical richness and ideas that it conveys in such profound simplicity. Symbolism is like a mirror in that it reveals by reflecting. When what is already in your mind is reflected back to you through symbols it can reveal connections and ideas that you didn’t even know exsited. I learned a lot as I meditated on all the themes that came to mind while examining this piece of artwork. New ideas were breathed into old thoughts and I’m eager to continue revolving and weighing them.

What do you think? What other ideas could this artwork convey?

If you like this topic, here are some related posts:

The Mother, the Dove, Mercy, and the Holy Spirit

Mercy and the Mother