The true revelation rouses the desire to know more by the truth of its incompleteness. - George MacDonald

The Justified Slaying of Laban

We just finished up the Book of Revelation in the New Testament in December so this next year invites us to a full study of the Book of Mormon. Part of what we covered today was the beheading of Laban by Nephi, a dramatic event that any new reader to the Book of Mormon encounters almost immediately.

In the beginning of the narrative, Nephi, a young man of unknown age is living peaceably in the city of Jerusalem and just a short time later, he stands before the drunken body of Laban as the Lord commands him to slay the man; what a contrast of situations for anyone to be placed in!

So when the topic came up in class, I wanted to shed some light on the issue, but seeing as how the teacher was seeking to cover a heavy load of information with little time to do it in, I refrained from going deeper in to the topic as there were more important matters that he was trying to cover. Since the topic has been on my mind, I figured it would make for an interesting article here at oneClimbs, so here we go. 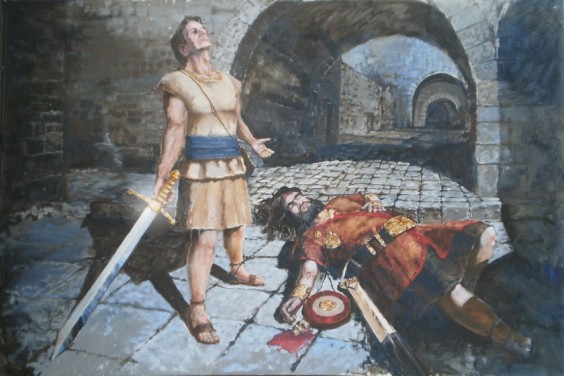 Thou shalt not kill – unless…

Many people are familiar with the 10 Commandments, especially “Thou shalt not kill” (Exodus 20:13) or “murder” as it is more properly rendered. But most people, I think, are not quite up to speed on the entire law that the God gave the Israelites. Even though, God commanded men not to kill, we must realize that He also commanded that certain acts were, in fact, worthy of execution.

The Crimes of Laban

Key to understanding why Nephi was justified in slaying Laban is the understanding of the crimes that Laban himself committed in context of the law at the time.

There were three attempts to acquire the record know as the brass plates, the first two being peaceful and reasonable. Laman the brother of Nephi was the first to make an attempt to secure the plates by simply talking with Laban and asking if he would give them to his family. Here is how Laban responded:

And behold, it came to pass that Laban was angry, and thrust him out from his presence; and he would not that he should have the records. Wherefore, he said unto him: Behold thou art a robber, and I will slay thee. (1 Nephi 3:13)

It is understandable that Laban might value the records and desire to not just give them away, but in his anger he violates the law by accusing Laman of robbery (an act of violent theft that will be further defined later) when Laman had not robbed or expressed any intention to rob, but then seeks to falsely enforce the law by attempting to murder Laman.

The Law of Moses had provisions for false accusation, which Laban as a military man should have clearly understood:

And the judges shall make diligent inquisition: and, behold, if the witness be a false witness, and hath testified falsely against his brother; Then shall ye do unto him, as he had thought to have done unto his brother: so shalt thou put the evil away from among you. (Deuteronomy 19:18-19)

According to the Jewish Virtual Library “The thief differs from the robber in the fact that the former steals furtively, when unobserved, whereas the robber takes openly and forcefully.” (emphasis added) Note the description of a robber in Ezekiel 18:10-13:

If he beget a son that is a robber, a shedder of blood, and that doeth the like to any one of these things, And that doeth not any of those duties, but even hath eaten upon the mountains, and defiled his neighbour’s wife, Hath oppressed the poor and needy, hath spoiled by violence, hath not restored the pledge, and hath lifted up his eyes to the idols, hath committed abomination, Hath given forth upon usury, and hath taken increase: shall he then live? he shall not live: he hath done all these abominations; he shall surely die; his blood shall be upon him. (Ezekiel 18:10-13).

John W. Welch explains in his article “Thieves and Robbers“:

Although there is only little difference between a thief and a robber in most modern minds, there were considerable differences between the two under ancient Near Eastern law. A thief (ganab) was usually a local person who stole from his neighbor. He was dealt with judicially. He was tried and punished civilly, most often by a court composed of his fellow townspeople. A robber, on the other hand, was treated as an outsider, as a brigand or highwayman. He was dealt with militarily, and he could be executed summarily.

The legal distinctions between theft and robbery, especially under the laws of ancient Israel, have been analyzed thoroughly by Bernard S. Jackson, Professor of Law at the University of Kent-Canterbury and editor of the Jewish Law Annual. He shows, for example, how robbers usually acted in organized groups rivaling local governments and attacking towns and how they swore oaths and extorted ransom, a menace worse than outright war. Thieves, however, were a much less serious threat to society. LINK

Laman in simply asking Laban for the plates was not attempting robbery. The brass plates were stored away in a treasury (1 Nephi 4:20) so it would have been impossible for Laman to forcibly take them from Laban if they were not even in his possession.

If, however, Laman was attempting robbery, Laban would actually have been justified in slaying him because he had the authority and duty to as Welch explains further:

Recently studies have shown in detail how the ancient legal and linguistic distinctions are also observable in the Book of Mormon. This explains how Laban could call the sons of Lehi “robbers” and threaten to execute them on the spot without a trial, for that is how a military officer like Laban no doubt would have dealt with a robber. It also explains why the Lamanites are always said to “rob” from the Nephites but never from their own brethren—that would be “theft,” not “robbery.” It also explains the rise and fearful menace of the Gadianton society, who are always called “robbers” in the Book of Mormon, never “thieves.” LINK

After fleeing from the presence of Laban, Laman returns to his brothers who are saddened to learn of Laban’s reaction. It is reasonable to assume that the brothers decide to give Laban the benefit of the doubt and realize that it probably sounded a bit fishy for them to just appear and request that Laban simply give away property that would have more than likely been valuable to him. But they have been commanded to obtain the plates so Nephi suggests that they take all of their gold, silver and precious things, basically their entire inheritance and purchase the plates from Laban.

It is at this point where Laban seals his own fate by actually committing the act he had just accused Laman of earlier that evening: robbery.

Laban covets (also against the ten commandments) the property of Nephi and his brothers and turns from being a military leader to the leader of a band of robbers by forcibly taking their property and then seeking to kill them under false pretenses.

Had Laban been taken to court by Nephi and his brothers, he would most likely have been convicted and been put to death for robbery, among other things, since Nephi and he four brothers met the requirements for the law of witnesses which required at least two or three.

But there was no time to pursue a trial and judging by the corruption in Jerusalem at the time and the fact that a law man had been the one committing the crime, he may have ended up getting off scott-free possibly due to his connections.

The crime of attempted murder by Laban was committed not once, but twice. First, Laban seeks to kill Laman with his own hands: “Wherefore, he said unto [Laman]: Behold thou art a robber, and I will slay thee” (1 Nephi 3:13).

Next, he instructs his servants to unlawfully execute Nephi, Laman and their brothers Lemuel and Sam. This would have been a multiple homicide that Laban himself would have been responsible for.

It may be only speculation, but the way that Laman so nonchalantly throws around false accusations and attempts murder seems to indicate that this man might have a much darker history filled with other acts of violence, robbery and murder that we are not aware of but that further justified Nephi in bringing justice to not only him and his brothers, but possibly others who never saw justice.

Nephi makes the decision to return yet again to try and obtain the plates, only this time, he doesn’t have a plan; he goes forth “led by the Spirit, not knowing beforehand the things which I should do” (1 Nephi 4:6).

He finds Laban drunk, lying in an alley, most likely the result of celebrating in his illegally acquired wealth. It is then that the Spirit of the Lord commands Nephi to slay Laban. Nephi recoils at the idea, “Never at any time have I shed the blood of man. And I shrunk and would that I might not slay him” (1 Nephi 4:10).

Nephi does not want to carry out the act of killing Laban but the Spirt of the Lord commands Nephi once again to slay Laban and this time, after recounting his crimes of attempted murder and robbery, Nephi obeys the Lord and beheads Laban with his own sword (1 Nephi 4:18).

It is also quite possible that this event was recorded as a type and shadow of the demise of the so-called “great and abominable church” mentioned in scripture. Years later, Nephi records a vision he received and note the similarities to Laban’s demise:

The most important thing to understand in this account is that Laban committed three grievous offenses, false accusation, robbery and attempted murder and received an appropriate punishment for his crimes according to the Law of Moses.

The only difficult thing for us to come to terms with is the individual who was used to carry out the sentence. I tend to think of Nephi as being in the same situation as young David when he justly slew and also beheaded Goliath of Gath. In both cases, David and Nephi were carrying out God’s justice and had his authority to do so. Case closed.

“Legal Perspectives on the Slaying of Laban” by John W. Welch”

“You shall not bear false witness against your neighbor” via Wikipedia

“Thieves, Robbers and War in the Book of Mormon” by Richard G. Grant

Book of Mormon Brass Plates Debunked Old Testament Perspective
Previous ArticleSustaining the servants of the Lord
Next Article Moderation in all things: a useless phrase

We shall not cease from exploration and the end of all our exploring will be to arrive where we started and know the place for the first time. -T.S. Elliott