The Relationship Between The Ancient Israelite Temple And The Endowment via TempleStudy.com

The following article is from TempleStudy.com 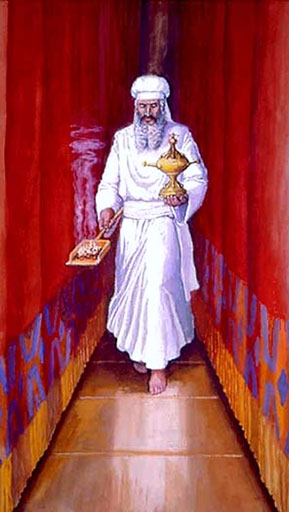 Ancient Israelite temple vestiture and ritual. The High Priest wears his special linen garments, sash and turban during his once per year entry into the Holy of Holies on Yom Kippur, the Day of Atonement. He approaches the Ark of the Covenant beyond the veil with the incense shovel in one hand, the smoke representing the prayers of the Israelites, and small vessel of bull’s blood in the other hand, the sin offering (atonement) on behalf of all the Israelites. Image based on Leviticus 16 and Exodus 25-31 and Exodus 35-40.

Professor William J. Hamblin has offered some good starting points in considering the relationship between the ancient Israelite temple ritual and the modern day LDS temple endowment.  It is from this vantage point that we should approach trying to understand these ancient ritual systems and the connections they might have with the Latter-day Saints temple ritual.

“When considering the possible relationship between ancient Israelite temple system and the LDS Endowment, the first thing to note is the basic purpose of the ancient temple was to reconcile Israel with God and bring all Israel (represented by the twelve stones inscribed with the tribal names) back into the presence of God (that is recapitulating the Sinai theophany), symbolically represented by the Holy Place and Holy of Holies within the veil.

Another important point to realize is that Christ was the last great blood sacrifice when He came in the meridian of time and offered the Atonement, which ended sacrifice by the shedding of blood (3 Ne. 9:19; cf.Mosiah 13:27; Alma 34:13; 3 Ne. 15:2–10). Since Christ was the last blood sacrifice (all precursors pointing to Him), from that point onward the outward nature of sacrificial ritual changed, but still pointing towards Christ, and still a sacrifice of a broken heart and contrite spirit (3 Ne. 9:20–22; Psalms 51:16–17;Psalms 34:18).

See the gallery below for various artists’ depictions of the rituals inside the ancient Israelite temple. Click each image to enlarge.

Approaching the altar of incense and the veil.

Prayer before the veil, with uplifted hands.

Offering incense in the Holy of Holies 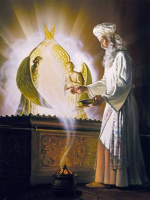 Sprinkling the atoning blood on the mercy seat.

Prayer before the altar of incense.

Offering incense within the Holy of Holies

Passing through the veil.

Offering incense on the altar.

Sprinkling blood on the mercy seat.

Offering incense on the altar.

Theophany of the Lord on the mercy seat.

Prayer with uplifted hands before the veil