How Prayer, Creation, Returning and Reporting Can Make Life Awesome

What if there was a doctrinally-based way to make every single day of your life significant, meaningful and amazing?

Well, there is and it is so simple. I’ve only been doing this for a few days now and am still starting to get the hang of it, but I see the potential and I understand the doctrine. Have you ever started working out only to notice a few days later that your pants are fitting you better and your muscles are feeling more solid? That’s about where I’m at. 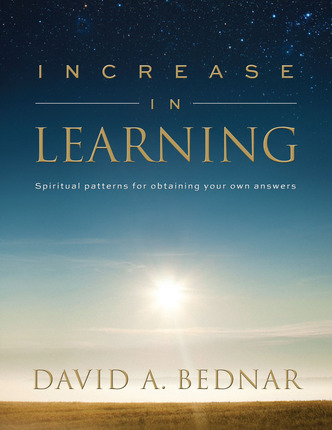 I’ve been really enjoying Elder Bednar’s book Increase in Learning. I’m somewhat embarrassed to admit it but this book, which was given to me as a gift from one of the wisest people I know, didn’t really impress me much at first. The title of the book really intrigued me and my expectations were pretty high since I really admire Elder Bednar. In the beginning, it didn’t really grab me and felt really “watered-down” and intended for a novice audience. I grew impatient and skimmed on through finding a couple nuggets and then shelved it about halfway through.

Time went by and this same friend sent me a second book from Elder Bednar called Act in Doctrine. This one sounded promising but I didn’t get around to really reading it because I was in the middle of five other books at the time.

A few months passed and as I plucked Act in Doctrine from my shelf and scanned it a little, some really interesting stuff jumped out at me and I felt like this was a book that I really needed to dig into at some point. However, I was swamped with work and shelved it after marking it up a little and collecting some nuggets of wisdom.

Then things came full circle as my good friend and former Institute teacher and his wife came to stay at my home before heading out on a little vacation. It was like old times again as we sat down and feasted on the Word. As we shared what we have been learning with one another, he showed me his personal pattern of learning which consisted of five steps. The simplicity and truthfulness of it were instantly apparent and my paradigm was shifted.

I pondered on it all that night and it was still on my mind the next morning. Then, I realized that I had read something similar in Act in Doctrine so I cracked it open and found what I was looking for. This particular section that had me so intrigued was referencing the fourth chapter of Increase in Learning that I so carelessly skipped over. I decided to give Increase in Learning another chance.

My second time through the book, my mind and heart were more open and humble. Wow, does attitude make a difference! This is a fantastic book! I’ll tell you this much, the fourth chapter of Increase in Learning alone will change your life, I kid you not.

So this brings me back around to the purpose of this article which is drawn from one little part of the “Related Readings” for chapter three.

The first of the “Related Readings” for chapter three is called “Pray Always” (Ensign, November 2008, 41-44). Elder Bednar mentions the creation of the earth and how it was created spiritually before it was created temporally (Moses 3:4-5). This doctrine is critical to understand as it relates to the next teaching.

He goes on to teach,

I have never made that connection before. Immediately my mind was flooded with possibilities and was filled with desire so I kept reading.

“At the end of our day, we kneel again and report back to our Father. We review the events of the day and express heartfelt thanks for the blessings and the help we received. We repent and, with the assistance of the Spirit of the Lord, identify ways we can do and become better tomorrow. Thus our evening prayer builds upon and is a continuation of our morning prayer. And our evening prayer also is a preparation for meaningful morning prayer. Morning and evening prayers–and all of the prayers in between–are not unrelated, discrete events; rather, they are linked together each day and across days, weeks, months, and even years.” (Increase in Learning, p.122)

Immediately, I thought of the temple and the principle of returning and reporting after receiving instruction. I then wondered:

What if I wake up each morning and spiritually create my entire day under the the direction and approval of God?

What if I made the focus of my day the loving creation of each point of the plan into existence through the power of will and the grace of God?

What if I reported back to my Father in Heaven each evening on my performance, expressing gratitude for his blessings and repenting of my shortcomings?”

I blink my eyes and feel like I’ve been hammering nails with green Jell-o my entire existence. Why on earth haven’t I been doing this every day for my entire life???”

So here I am attempting to apply the principle of prayer according to the doctrines of creation, accountability, obedience, repentance and atonement.

Thus far it feels like the first few days of going to the gym. I feel a little uncoordinated, weak and undisciplined but my pants are fitting better so to speak and I’m loving the endorphin kick! I’m excited to see how this changes my life and how it affects my relationship with God.

Elder Bednar puts it best, “The answers always are in the doctrine and principles!” (Increase in Learning, 169)

I also noticed that the cover of Bednar’s book subtly references the order of Celestial symbols that is also found on many temples, particularly the Northern side of the Las Vegas Temple. Typically, there is also a moon between the Earth and Sun which may reference Jesus Christ, like on the Southern side of the Las Vegas Temple. I wonder if the moon was left out intentionally and if so, what potential meanings can be conveyed with just the earth, sun and stars in this order.

There could be numerous other possibilities as well.