"Keep close to Nature's heart... and break clear away, once in awhile, and climb a mountain or spend a week in the woods. Wash your spirit clean." - John Muir

The Motto of the Church of Latter-day Saints

The Constitution of our country formed by the Fathers of liberty. Peace and good order in society. Love to God, and good will to man. All good and wholesome laws, virtue and truth above all things, and aristarchy, live forever! But woe to tyrants, mobs, aristocracy, anarchy, and toryism, and all those who invent or seek out unrighteous and vexatious law suits, under the pretext and color of law, or office, either religious or political. Exalt the standard of Democracy! Down with that of priestcraft, and let all the people say Amen! that the blood of our fathers may not cry from the ground against us. Sacred is the memory of that blood which bought for us our liberty.

Aristarchy (live forever): A body of good men in power, or government by excellent men.

Aristocracy (woe to): A form of government, in which the whole supreme power is vested in the principal persons of a state; or in a few men distinguished by their rank and opulence. When the supreme power is exercised by a small number, the government is called an oligarchy. The latter word however is usually applied to a corrupted form of aristocracy.

While it seems that this wasn’t actually ever adopted by the church (it’s kind of a long motto and very politically oriented), it’s significant that it was liked enough for Joseph Smith and several other important men to put their names to it. 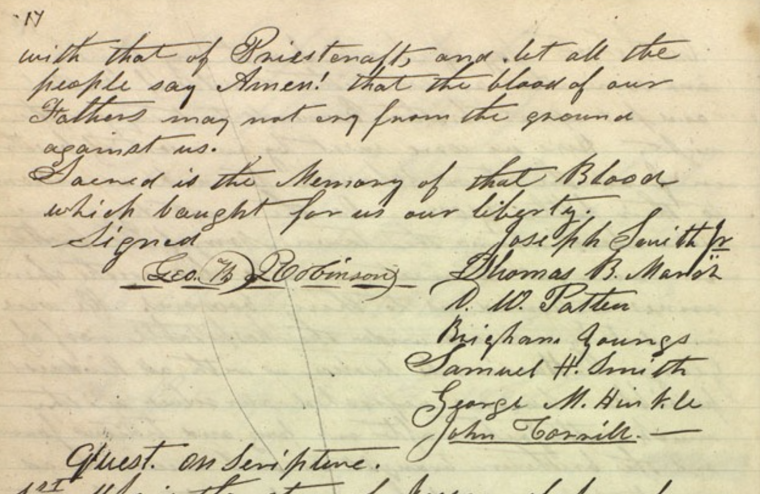 These are the people who buy the life of this world at the price of the Hereafter. - Qur'an 2:86