When our current heart is shattered, then God gives us a new one

The duty of Christians toward their fellow men and women is to let their light shine, not to force on them their interpretations of God’s designs.

I think this is so profoundly simple and the truth so self-evident that it should instantly add to the improvement of relations of individuals in virtually every situation. I know that I can improve upon this, because I often feel like I have to correct people and while sometimes it is necessary, often a competing interpretation could be equally true for that person.

If you were faithful and had been living the life, had been a practicing Christian, as the word means – namely, one who does as Christ does – then indeed you would have drawn the world after you. In your church you would be receiving and giving out nourishment, strength to live. Those who stand outside looking at the proceedings inside, who are more repelled by your general worldliness than by your misrepresentation of God, would positively hasten to the company of people loving and true, eager to learn what it was that made them so good, so happy, so unselfish, so free of care, so ready to die, so willing to live, so hopeful, so helpful, so careless to possess, so undeferential to possession.

When we talk of “missionary work” I’m often repelled by the constant barrage of “programs” that are created by well-meaning missionaries, ward mission leaders, etc. Too often we think that we need to have a “pitch” or something like that when instead, the simple passionate cultivation of the the Spirit in the life of a true disciple can allow God to work through them.

Why should I care to convince you that my doctrine is right? What does any honest person care what you think of his doctrine? To convince another by intellect alone, while the heart remains unmoved, is but to add to his condemnation.

We see a lot of this don’t we? We argue over points of doctrine and doctrine is important, but it is far more important to be a reality in one’s life rather than position point.

To make a man happy as a lark, might be to do him a grievous wrong: to make a man wake, rise, look up, and turn is worth the life and death of the Son of the Eternal.

There are a lot of really deep thoughts I have on this one. I wrote something in relation to this in a previous post but I think there is a very dangerous movement in the world today that seeks to eliminate suffering and promote pain at the expense of detouring from a path that would lead to tremendous growth and knowledge of God. Read Alma 29 where Alma expresses a deep desire to eliminate all sorrow from the world but realizes he sins in his wish.

Coincidentally, I just saw this quote from Samuel L. Johnson in the stall of a bathroom at Westminster college in Utah. 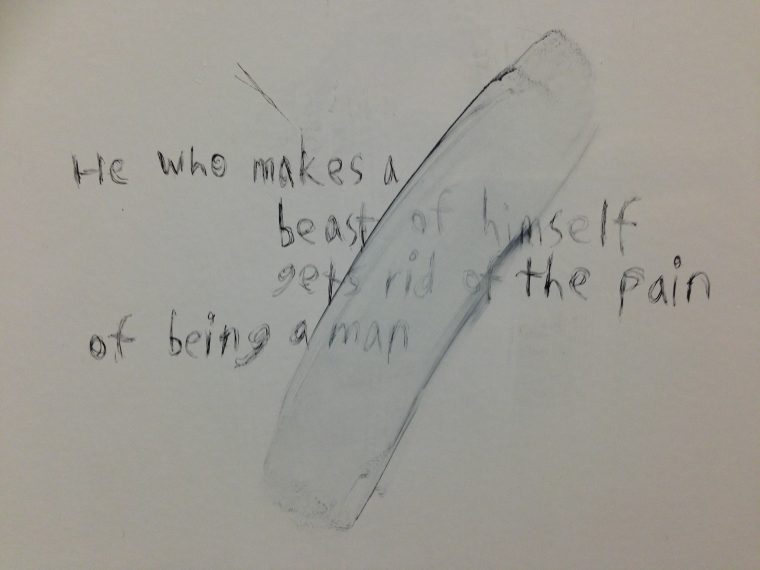 What may sound profound, the idea of lowering yourself to base natural urges to avoid pain, is counter-intuitive to the higher way punctuated by King Benjamin:

“For the natural man is an enemy to God, and has been from the fall of Adam, and will be, forever and ever, unless he yields to the enticings of the Holy Spirit, and putteth off the natural man and becometh a saint through the atonement of Christ the Lord, and becometh as a child, submissive, meek, humble, patient, full of love, willing to submit to all things which the Lord seeth fit to inflict upon him, even as a child doth submit to his father.” (Mosiah 3:19)

I’m not all the way through George MacDonald’s work, but I may share more quotes as I come across them.

One Climbs, one sees. - Rene Daumal