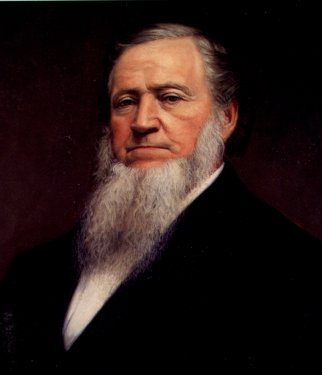 There is no truth but what belongs to the Gospel
“Mormonism,” so-called, embraces every principle pertaining to life and salvation, for time and eternity. No matter who has it. If the infidel has got truth it belongs to “Mormonism.” The truth and sound doctrine possessed by the sectarian world, and they have a great deal, all belong to this Church. As for their morality, many of them are, morally, just as good as we are. All that is good, lovely, and praiseworthy belongs to this Church and Kingdom. “Mormonism” includes all truth. There is no truth but what belongs to the Gospel. It is life, eternal life; it is bliss; it is the fulness of all things in the gods and in the eternities of the gods.” (DBY, 3)

It is our duty to gather every item of truth and reject every error
It is our duty and calling, as ministers of the same salvation and Gospel, to gather every item of truth and reject every error. Whether a truth be found with professed infidels, or with the Universalists, or the Church of Rome, or the Methodists, the Church of England, the Presbyterians, the Baptists, the Quakers, the Shakers, or any other of the various and numerous different sects and parties, all of whom have more or less truth, it is the business of the Elders of this Church (Jesus, their Elder Brother, being at their head) to gather up all the truths in the world pertaining to life and salvation, to the Gospel we preach, … to the sciences, and to philosophy, wherever it may be found in every nation, kindred, tongue, and people and bring it to Zion.” (DBY, 248)

Mormonism embraces everything
“In a word, if “Mormonism” is not my life, I do not know that I have any. I do not understand anything else, for it embraces everything that comes within the range of the understanding of man. If it does not circumscribe every thing that is in heaven and on earth, it is not what it purports to be.” (DBY, 2)

The gospel embraces all
“[The gospel] embraces all morality, all virtue, all light, all intelligence, all greatness, and all goodness. It introduces a system of laws and ordinances.” (DBY, 3)

One system
“Such a plan incorporates every system of true doctrine on the earth, whether it be ecclesiastical, moral, philosophical, or civil; it incorporates all good laws that have been made from the days of Adam until now; it swallows up the laws of nations, for it exceeds them all in knowledge and purity, it circumscribes the doctrines of the day, and takes from the right and the left, and brings all truth together in
one system, and leaves the chaff to be scattered hither and thither.” (DBY, 3–4)

The faith encircles all
“All knowledge and wisdom and every good that the heart of man can desire is within the circuit and circle of the faith we have embraced.” (DBY, 446)

One true system
“It comprehends all true science known by man, angels, and the gods. There is one true system and science of life; all else tends to death. That system emanates from the Fountain of life.” (DBY, 2)

Truth will abide
“Truth will abide when error passes away. Life will remain when they who have rejected the words of eternal life are swallowed up in death. I like the truth because it is true, because it is lovely and delightful, because it is so glorious in its nature, and so worthy the admiration, faith and consideration of all intelligent beings in heaven or on the earth.” (DBY, 9)

Know light from the darkness
“Every individual that lives according to the laws that the Lord has given to his people, and has received the blessings that he has in store for the faithful, should be able to know the things of God from the things which are not of God, the light from the darkness, that which comes from heaven and that which comes from somewhere else. This is the satisfaction and the consolation that the Latter-day Saints enjoy by living their religion; this is the knowledge which every one who thus lives possesses.” (DBY, 35)

Truth and science
“…our religion will not clash with or contradict the facts of science in any particular. You may take geology, for instance, and it is a true science; not that I would say for a moment that all the conclusions and deductions of its professors are true, but its leading principles are; they are facts-they are eternal; and to assert that the Lord made this earth out of nothing is preposterous and impossible. God never made something out of nothing; it is not in the economy or law by which the worlds were, are, or will exist. There is an eternity before us, and it is full of matter; and if we but understand enough of the Lord and his ways, we would say that he took of this matter and organized this earth from it. How long it has been organized it is not for me to say, and I do not care anything about it. As for the Bible account of the creation we may say that the Lord gave it to Moses, or rather Moses obtained the history and traditions of the fathers, and from these picked out what he considered necessary, and that account has been handed down from age to age, and we have got it, no matter whether it is correct or not, and whether the Lord found the earth empty and void, whether he made it out of nothing or out of the rude elements; or whether he made it in six days or in as many millions of years, is and will remain a matter of speculation in the minds of men unless he give revelation on the subject. If we understood the process of creation there would be no mystery about it, it would be all reasonable and plain, for there is no mystery except to the ignorant.” (Brigham Young, Journal of Discourses, vol. 14, pg. 116, 14 May 1871)

A comfort zone is a beautiful place but nothing ever grows there. - Unknown