Just as LDS Temples bear profound doctrinal teachings in their architecture, I suspect that our meetinghouses might have some things to teach us as well.

For the past several years, I’ve been paying close attention to the architecture certain styles of chapels that the Church of Jesus Christ of Latter-day Saints has been building. I found curious repetition of certain numbers and themes and assumed that they were probably just coincidental, but then had some fun considering possible meanings in the design.

I’ve still got a lot of studying yet to do, but I’ll share what I’ve observed thus far along with some potential interpretations.

The gate and four pillars

I have noticed a repetition of an interesting architectural theme that seems to illustrate the idea of a ‘gate’ with four pillars, two on each side. If the motif is present on a building it will usually show up in three distinct places:

Here are some examples from the chapel where I attend church:

Here are a few more examples of this motif below:

The number four is associated with some powerful religious themes, among them are:

A chapel is where the general congregation meets each Sabbath and where Aaronic priesthood ordinances such as the sacrament and baptism are performed. These ordinances are Atonement-centered and deal with the concepts of purity, rebirth, renewal, resurrection, etc.

“Enter ye in at the strait gate: for wide is the gate, and broad is the way, that leadeth to destruction, and many there be which go in thereat:”

The arched gate-like shape might be referencing the “straight gate” that we enter when we are baptized into the church of Christ. The repetition of the number four could be in reference to the fact that these are earthly ordinances and that this building is a location where these things all come together.

Another interesting idea to play around with is the fourth article of faith:

We believe that the first principles and ordinances of the Gospel are: first, Faith in the Lord Jesus Christ; second, Repentance; third, Baptism by immersion for the remission of sins; fourth, Laying on of hands for the gift of the Holy Ghost.

These four elements are a major part of what is taught within the walls of these chapels and the architecture might be subtly indicating this and possibly much more.

A “Square” is a physical representation of the number 4. It may be represented by an “L” shape, a traditional four-sided shape. The number four can represent the following ideas:

Here is an image of the entrance of to this chapel with a square motif above: 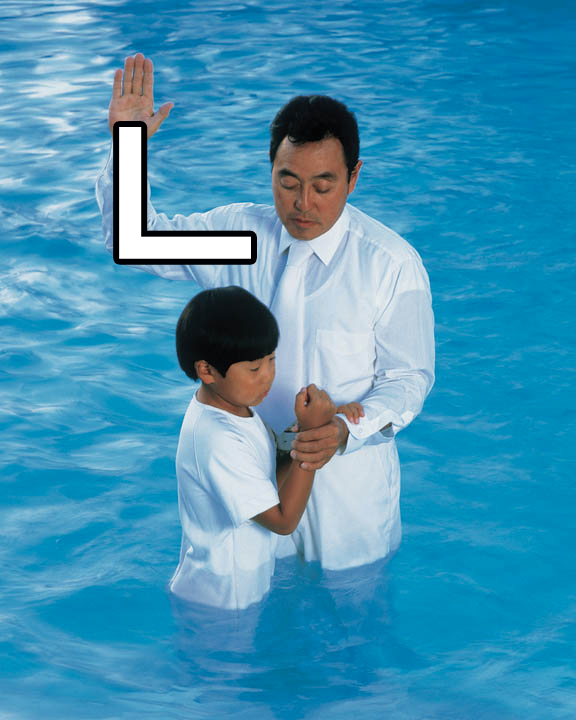 The square was sometimes depicted in ancient Christian artwork on the robes of apostles or other Saints. Ancient Christianity used several symbols in the beginning such as the vesica picsis (the Christian fish symbol), the pentagram (for the five wounds of Christ) and later on the cross (which is numerically based on the square itself) became the standard. Masonry picked up on the symbolism in the 1700’s and uses the square and compass as its central symbols, but the use of these motifs is far more ancient.

Many chapels contain a baptismal font. Since baptism is an ordinance dealing with “rebirth” that allows one to be “born again” as a child of Christ, you might consider a baptismal font to be the ‘womb’ of the chapel. The church has often been compared to a woman:

In Christ’s time, when a man proposed to a woman and she accepted they were betrothed and it was then her duty to remain faithful to the man she had betrothed herself to until the wedding. This covenant relationship between man and woman is used often to describe the relationship between Christ and his church.

In like manner, we must be true to our covenants that we have made with Jesus Christ.

One plus four equals five

The four pillars plus the one gate equal the number five which is an archetype tied to the ideas of:

Most of these elements fit comfortably within the purposes of the chapels as well.

This is my favorite chapel (thus far) in Las Vegas. First note the five distinct peaked sections of the roof and remember what the number five is tied to. Note that here yet again we have a repetition of four and five, a main gate way, with two peaked areas of the roof on each side. Remember that we have the same arrangement on the other side of the building which gives us the number 10 which is associated with:

Next, we have the main entry way where you can clearly see the four pillars along with three doors and a huge octagonal window.

The octagon represents the number eight which has deep symbolic meaning that is really fun to explore. The number three is also very significant, so I’ll break down some potential interpretations below.

The number three is tied to the following ideas:

The number eight is tied to:

Since there are four pillars on each entrance of the building, we have a total of eight. The number eight was used to indicate sacred space in the ancient world, and is still used for the same purpose today. Anciently, they used octagon-shaped baptismal fonts, eight-sided buildings and placed eight pillars around altars or fonts.

In a vast number of chapels I have been in, I have also noticed that there are eight lights hanging in the chapel itself and occasionally, octagon-shaped clocks on the walls!

The number eight is associated with:

There is too much on the number eight to cover here so I’ll refer you to this other article I wrote about it a while back. Included are references to where I got my information from; it’s amazing stuff.

The gathering of Israel

Above the four peaked areas surrounding the fifth center peak that makes up the entrance, you will see a circle with four ‘keystones’. According to Val Brinkerhoff in his book series “The Day Star: Reading Sacred Architecture” he identifies this symbol as used in LDS symbology as representing the gathering of Israel from the four quarters of the earth which is a duty of the tribe of Ephraim in the last days.

There are also eight slats inside of the circle, and eight as we know represents Christ. Note that there are four of these on each side of the building totaling eight once again.

My interpretation of the whole motif is that Israel is being gathered to Christ from the four quarters of the earth through the authority of the priesthood under the direction of the Godhead – or it could just be a plain old vent ;) However, when Jesus’ disciples came to him and asked why he spoke in parables, he replied:

Because it is given unto you to know the mysteries of the kingdom of heaven, but to them it is not given. For whosoever hath, to him shall be given, and he shall have more abundance: but whosoever hath not, from him shall be taken away even that he hath. Therefore speak I to them in parables: because they seeing see not; and hearing they hear not, neither do they understand…But blessed are your eyes, for they see: and your ears, for they hear. (Matt. 13:11-16)

It was several years ago when I watched a video presentation of Val Brinkerhoff talking about the potential symbolism of LDS steeples. I saved this one for last because it is one of my favorite things to observe in chapel architecture.

Take a look at the photo below and see if you can identify the motif of a square transitioning to a circle through an octagon.

As we can see from the study of just a few of these chapels, the symbolism seems to me to be too deliberate to be coincidental and the fact that these same motifs are used on Temples as well leads me to conclude that the patterns are intentional or at least inspired.

Sacred architecture and by extension, sacred geometry, are reminders to us from a loving God that his creations and purposes are all connected into a single glorious plan for each and every one of us. If we develop eyes to see, we will find that there are doctrinal teachings and truths everywhere. We cannot create anything except upon eternal laws that govern our existence, so expect to find the fingerprints of God within all that we do and observe.