One Climbs, one sees. - Rene Daumal

A diamond sun and celestial worlds 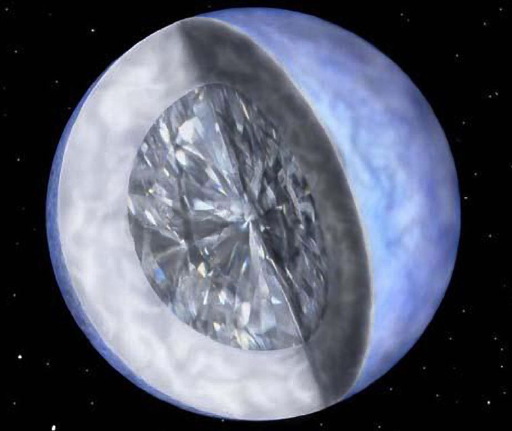 Several years ago, scientists discovered what they believe is the largest diamond known to man: “a compressed heart of an old star that was once bright like our Sun but has since faded and shrunk.” LINK

The huge cosmic diamond – technically known as BPM 37093 – is actually a crystallised white dwarf. A white dwarf is the hot core of a star, left over after the star uses up its nuclear fuel and dies. It is made mostly of carbon.

For more than four decades, astronomers have thought that the interiors of white dwarfs crystallised, but obtaining direct evidence became possible only recently.

The white dwarf is not only radiant but also rings like a gigantic gong, undergoing constant pulsations.

“We figured out that the carbon interior of this white dwarf has solidified to form the galaxy’s largest diamond,” says Metcalfe.

Astronomers expect our Sun will become a white dwarf when it dies 5 billion years from now. Some two billion years after that, the Sun’s ember core will crystallise as well, leaving a giant diamond in the centre of the solar system.

“Our Sun will become a diamond that truly is forever,” says Metcalfe. LINK

This made me think of Doctrine and Covenants 130:6-9 which speaks of our world, when redeemed, becoming like crystal or a sea of glass:

The angels do not reside on a planet like this earth; But they reside in the presence of God, on a globe like a sea of glass and fire, where all things for their glory are manifest, past, present, and future, and are continually before the Lord. The place where God resides is a great Urim and Thummim. This earth, in its sanctified and immortal state, will be made like unto crystal and will be a Urim and Thummim to the inhabitants who dwell thereon, whereby all things pertaining to an inferior kingdom, or all kingdoms of a lower order, will be manifest to those who dwell on it; and this earth will be Christ’s.

Interesting that there is at least one crystal celestial body floating around out there that is not only “radiant” but “rings like a giant gong undergoing constant pulsations”. I wonder what these pulsations are and how they occur.

Artifacts Parallels The Cosmos
Previous ArticlePersuasion vs. Force
Next Article Review: The Book of Mormon, A Reader’s Edition