Myth is not fiction: it consists of facts that are continually repeated and can be observed over and over again. - Carl Jung

Sikhism’s “Five Ks” and Other Sacred Clothing and Artifacts

I was driving down my street the other day and noticed that there was a family gathering going on at one of the homes. Seeing the turbans I figured that they must be of the Sikh faith. I realized how little I knew about their beliefs and thought I’d do a little research since I like to study other religions.

It is a very simple faith with some unique aspects that I found fascinating.

The Sikh (pronounced ‘seek’) religion that originated in southern Asia around the 15th Century. The word Sikh means ‘disciple’ or ‘student’ and the core purpose of the faith is to seek oneness with God. In order to escape the cycle of reincarnation, and become one with God, one must overcome the five obstacles which are: lust, anger, greed, attachment and ego.

Each of these symbols are a “representation of the ideals of Sikhism, such as honesty, equality, fidelity, militarism, meditating on God, and never bowing to tyranny.” [source] Much like how a Christian will wear a cross to remind them of Jesus Christ and his sacrifice, the Sikh faith includes wearable symbolic emblems that serve to keep in remembrance sacred commitments or covenants entered into.

The Kesh, or uncut hair, reminds me of the vow of the Nazarite (Outlined in Numbers chapter 6) which says that “there shall no razor come upon his head” and that “he shall let the locks of the hair of his head grow long” (vs 5). The Kanga, or wooden comb, keeps the hair nice and tidy and emphasizes looking after the body that God has created. The Katchera, which is an undergarment resembling a pair of white boxers reminds me of a very similar article worn by endowed members of the LDS faith and the linen breeches worn by Aaron and his sons that went from the loins to the thighs (Exodus 28:42).

The Kara, or iron bracelet is a perfect archetypal reference to eternity in its circular appearance. The Kirpan, or sword, is a striking reminder to never bow to tyranny along with the struggle against injustice and the defense of the weak. I find each of these five symbols quite fascinating and can see several parallels with practices of other faiths, particularly my own.

Some of the emblems are visible like the uncut hair, iron bracelet and perhaps the sword, but others are concealed such as the wooden comb and the cotton undergarments. This got me thinking about the temple garments worn by members of the LDS faith who have received an ordinance called the “Endowment”.

These white garments, worn under the clothing, are made from various light, comfortable fabrics and appear very much like any white shirt and boxers that you would pick up at the store. The only noticeable difference would be four small, subtle marks embroidered in specific locations; each mark has a distinct meaning, much like each of the symbolic “Five Ks”. The marks and garment as a whole remind the wearer of these sacred vestments about the atonement, obedience to God, bridling one’s passions, continual growth and a recognition of the Messiahship of Jesus Christ.

When these sacred vestments are “put on” it symbolizes the covenants and promises we “take upon ourselves” as we wear the garment and simultaneously live out the promises we have made. The apostle Paul taught the Galatians:

The phrase “put on” is from the Greek word “Enduw” (pronounced “en-doo’-o”) which means: “(in the sense of sinking into a garment); to invest with clothing  (literally or figuratively):–array, clothe (with), endue, have (put)  on.”

Bryce Haymond over at TempleStudy.com reported on the discovery of what are believed to be early Christian graves in Egypt. Several of the mummies were wearing some interesting robes and garments with markings on them:

Ten of the robes on this burial are plain linen garments but the many strands of linen ribbon wrapped around the upper half of the body are gathered together into a complex knot. This knot is found on the left shoulder on two of the robes and on the right shoulder of the remaining eight robes. The symbol of the sacred knot or bow is common in Egypt and elsewhere and may indicate sacerdotal or priestly authority.

The piece of clothing closest to the body is not usually well preserved due to the destructive influence of fluids and chemicals remaining in the body. In this burial, as well as a few others, however, the woolen garment next to the skin is sufficiently well preserved for us to observe that small rosettes have been woven into the material in particular locations. There is one rosette over each breast and one on the right leg near the knee, but there is no corresponding rosette on the left leg. Across the lower abdomen, the material also has a hemmed slit about six inches long. [source] 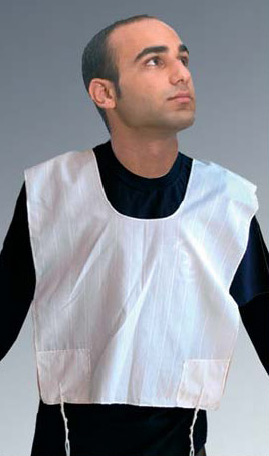 Bryce published another interesting article about the “Tallit Katan” which is worn by Orthodox or Hasidic Jews under their clothing in accordance to the commandment given in Numbers 15:38-40.

Check out these other oneClimbs articles that also reference sacred clothing:

Whether it a simple cross worn by many in Christendom, a white garment, a turban, sword or tallit katan, the use of wearable reminders of sacred beliefs has been around since God created coats of skins for Adam and Eve after they were expelled from the Garden of Eden.

I find it interesting how other faiths make daily use of visual symbols to remind them of what is sacred and think there is much we can learn from each other on the subject. Someday soon, I hope to meet these Sikh neighbors of mine and learn more about their religious beliefs and practices.