What are Doctrines, Principles & Applications? 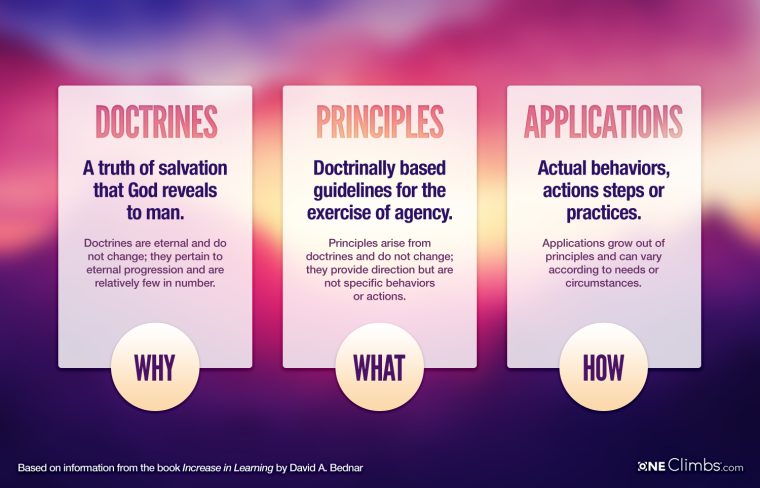 Ever find yourself thinking “I’m not quite sure I really know the definition of that word”? If not, then you are amazing and I applaud you.

I’ve found it to be valuable to quiz yourself continually as to your knowledge concerning the meanings of words. Here on oneClimbs, I’ve written a few articles trying to clarify common misconceptions about the meanings of certain words. Don’t even get me started on Latter-day Saints use of the word “peculiar“. Understanding the true meanings of words will often bring refreshing insights that are hidden behind a veil of misconception.

A few days ago, I was discussing a particular study method with a friend and one step in the process was: “identifying and understanding doctrines and principles”. So as I commonly do, I asked myself “so what’s the difference between a doctrine and a principle”. The more I thought about it, I realized that I didn’t have a clear definition for either in my mind.

I decided to go back to a book that a friend gave me for Christmas called  “Act in Doctrine” by David A. Bednar. On pages xiv-xv in the Preface he defines what doctrines and principles are and then notes a third essential element: Applications. I’ve boiled down his descriptions into the following simplified versions:

For instance, the doctrine that God is our Father and that he is willing to commune with us requires that we learn the principle of prayer. The Church offers guidelines on how to appropriately address Heavenly Father but it does not tell us what to say. Likewise, the principle of Sabbath Day observance does not have a long list of rules, we are expected to find our own applications by listening to the guidance of the Spirit.

This is where I think we make the largest mistakes in our gospel instruction. Instead of focusing on the doctrine and principles in our teaching, a teacher can be tempted to teach their application as the gospel truth. If perhaps one day you happened to pray to God while facing east and wearing flip-flops and had an amazingly profound experience, you should not teach that everyone should pray facing east and wearing flip-flops.

If you feel that caffeine is the reason that coffee and tea are against the Word of Wisdom, you probably should not be teaching that as doctrine. By focusing our understanding on doctrines and principles, we will be assisting the Spirit to teach the proper applications that are individually necessary.