The “All-Seeing-Eye” Symbol and the Urim and Thummim Connection 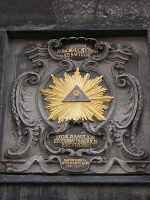 Chances are that you are familiar with the “All-seeing-eye” symbol, but your feelings toward it vary on the context that is it presented in. There are connections to this symbol ranging from the Masons, to the so-called New World Order, the occult and, yes, Christianity.

Probably one of the most common usages of it is on the back of our one dollar bill. The eye is topped with the words “Annuit Coeptis,” which means “He approves (or has approved) [our] undertakings” the ‘He’ being God indicating his approval of our actions during the Revolutionary War.

The eye within a triangle shows up anciently in Egyptian mythology, Buddism and early Christianity. The number three has been associated with Deity for ages in cultures across the globe and throughout history, so a triangle associated with an eye is a simple way to indicate that the eye being shown is that of Deity.

But what can the restoration teach us about this symbol that we may not be able to learn from the rest of the world?

Before Joseph Smith ever came in contact with the Nephite ‘interpreters’ or ‘urim and thummim’ as they were later called, he had some interesting experiences with a “seer stone”. With this stone, he was able to allegedly locate lost objects, etc. Something interesting appears in the account of Joseph Smith’s 1826 trial relative to his experience with the discovery of his seer stone:

“With some labor and exertion he found the stone, carried it to the creek, washed and wiped it dry, sat down on the bank, placed it in his hat, and discovered that time, place and distance were annihilated; that all intervening obstacles were removed, and that he possessed one of the attributes of Deity, an All-Seeing-Eye.”  (Purple account, Joseph Smith Testimony, 1826 trial)

We then have an account of Joseph Smith’s first interaction with the Nephite ‘urim and thummim’ via Joseph Knight who said:

“…he (Joseph Smith) seamed to think more of the glasses or the urim and thummim than he did of the plates for says he, I can see anything. They are Marvelous.”

So it appears that the seer stone and the urim and thummim both allowed the user to possess the attribute of an ‘all-seeing-eye’. We know of ‘seers’ in the scriptures, men who had the ability to perceive things that other men could not through divine power.

In the Book of Mormon, the missionary Ammon explains what a seer is to the king of Zarahemla:

“Now Ammon said unto him: I can assuredly tell thee, O king, of a man that can translate the records; for he has wherewith that he can look, and translate all records that are of ancient date; and it is a gift from God. And the things are called interpreters, and no man can look in them except he be commanded, lest he should look for that he ought not and he should perish. And whosoever is commanded to look in them, the same is called seer.” (Mosiah 8:13)

Where it gets interesting to me, however, is Lucy Mack Smith’s physical description of the interpreters/urim and thummim that Joseph Smith had in his possession.

“On the morning of September 22, after Joseph had returned from the hill, he placed the article [the Nephite interpreters] of which he spoke into my hands, and, upon examination, I found that it consisted of two smooth three-cornered diamonds set in glass, and the glasses were set in silver bows, which were connected with each other in much the same way as old fashioned spectacles. . . . He [Joseph Smith] handed me the breastplate spoken of in his history. It was wrapped in a thin muslin handkerchief, so thin that I could feel its proportions without any difficulty. It was concave on one side and convex on the other, and extended from the neck downwards, as far as the center of the stomach of a man of extraordinary size. It had four straps of the same material, for the purpose of fastening it to the breast.” (History of Joseph Smith by His Mother Lucy Mack Smith)

The actual shape of the urim and thummim that Joseph possessed were triangular! Lucy also described them as ‘spectacles’ and in other accounts we read that Joseph probably held them up to his face to use them as one would use a pair of glasses.

In 1891 William Smith, Joseph Smith’s brother, was interviewed and he said:

“Among other things we inquired minutely about the Urim and Thummim and the breastplate. We asked him what was meant by the expression “two rims of a bow,” which held the former. He said a double silver bow was twisted into the shape of the figure eight, and the two stones were placed literally between the two rims of a bow. At one end was attached a rod which was connected with the outer edge of the right shoulder of the breast-plate. By pressing the head a little forward, the rod held the Urim and Thummim before the eyes much like a pair of spectacles. A pocket was prepared in the breastplate on the left side, immediately over the heart. When not in use the Urim and Thummim was placed in this pocket, the rod being of just the right length to allow it to be so deposited. This instrument could, however, be detached from the breastplate and his brother said Joseph often wore it detached when away from home, but always used it in connection with the breastplate when receiving official communications, and usually so when translating as it permitted him to have both hands free to hold the plates.” (J. W. Peterson in The Rod of Iron I:3 (February 1924), 6—7.)

But think of what you would see if you were standing in front of someone holding the urim and thummim described up to their eye; you would have an eye within a triangle! So what we have with this information from church history is a link between the “All-Seeing-Eye” symbol and to the instrument known as a urim and thummim.

Another thing a triangle can symbolize is past, present and future, the knowledge and comprehension of which constitutes ‘omniscience’ one of God’s primary attributes. Take a look at Doctrine and Covenants 130:6-9:

“The angels do not reside on a planet like this earth; But they reside in the presence of God, on a globe like a sea of glass and fire, where all things for their glory are manifest, past, present, and future, and are continually before the Lord. The place where God resides is a great Urim and Thummim. This earth, in its sanctified and immortal state, will be made like unto crystal and will be a Urim and Thummim to the inhabitants who dwell thereon, whereby all things pertaining to an inferior kingdom, or all kingdoms of a lower order, will be manifest to those who dwell on it; and this earth will be Christ’s.”

The All-Seeing-Eye symbol seems clearly indicative of the active use of the instrument known as a urim and thummim whether that instrument be diamond or glass-like stones or of the place that God resides and the future glorified state of our own world.

The gift of omniscience seems to be something that God has shared with man in certain capacities here on the earth and something that will be an attribute to all those of a Celestial inheritance.

It should be no surprise to anyone that this marvelous symbol (and many others like the pentagram and the number 13) would be co-opted by Satan and others who wish to apply God’s divine attributes to their own selfish purposes. Everything originates from God. He is the great creator and Satan can create nothing in and of himself; “he is impotent” as Boyd K. Packer so succinctly put it. So any symbol he or others attribute to themselves is simply something that is being borrowed from a higher, purer source.

A church-endorsed Ensign article circa 1981 states:

“Symbols can, of course, be misleading. Interpretations can be wrong, or the symbol itself misunderstood. However, in dealing with scriptural symbols, we have been given a guide. The Savior proclaimed that “all things bear record of me” (Moses 6:63). That is, all symbols teach of Christ, of his mission and relationship to us.” (Lenet Hadley Read, “All Things Testify of Him: Understanding Symbolism in the Scriptures”, Ensign, Jan. 1981, 5)

I have learned over the years the truthfulness of the doctrine that there is opposition in all things; so if you can find a symbol being used for evil purposes, you can be pretty confident that there is a righteous use for that particular symbol somehow. I am personally grateful for the context that the restoration brings to the study of symbolism.

Symbols are nothing more than an alphabet; letters that can be rearranged to convey different ideas. They are neither good nor evil in and of themselves. Just as I can take a few letters and spell the word D-O-G which would make you think of a furry four-legged beast, or I can arrange them to spell G-O-D and the meaning could not be more different.

Satan spoke to Eve in the form of the serpent and Moses was commanded by God to build a brass serpent to heal all Israelites who looked upon it. This same serpent-on-a-staff motif as a method of healing is also utilized in the medical industry in the form of the intertwining snakes of the Caduceus.

So the meaning of the symbol is defined by the intent of whomever is using it.

The search for the true meaning of symbols will be something that will always fascinate me and I look forward to a future day when all symbols can be understood in their proper order and place in truth.