Any utterance worthy of being called a truth, is human food - George MacDonald

Just like the number one was not considered a number by the ancients, two was also in the same boat.

Thus, two was not considered a ‘number’ but, like one, an originator of numbers.

“In the Dyad we see the Monad refract as Two. The Dyad emphasized difference. It foreshadows the world’s apparent boundaries, conflict and echoes our own sense of separation. Opposites appear when separateness begins. (A Beginner’s Guide to Constructing the Universe, by Michael Schneider – 1st ed., 36)

This is where things get interesting. Ponder the prior quote when reading Lehi’s words in 2 Nephi 2:11-13:

For it must needs be, that there is an opposition  in all things. If not so, my first-born in the wilderness, righteousness could not be brought to pass, neither wickedness, neither holiness nor misery, neither good nor bad. Wherefore, all things must needs be a compound in one; wherefore, if it should be one body it must needs remain as dead, having no life neither death, nor corruption nor incorruption, happiness nor misery, neither sense nor insensibility.

Things only exist because their opposite exists. Light can only exist because there is darkness that it is separate and distinct from. God actually creates by dividing things and placing a separation between them; one only needs to look as far as Genesis for proof of this. God divides the:

He commanded all living things to multiply and all living cells multiply through a process known as mitosis where they will split into two to form two new cells; creation through division, division = multiplication! The implications of this are extremely fascinating to ponder and meditate on.

Some really interesting things begin to happen now when you consider the implications of two points in existence.

Two radiating points, like the waves generated by two pebbles dropped in a pond, intersect to create a shape called the vesica piscis (Beginners, 34). Interestingly, the vesica piscis is a shape similar to many openings of the body like the eyes, the mouth, vocal cords and our reproductive openings through which life passes into this world.

The number two or the vesica piscis can represent:

We see the vesica piscis used frequently around windows and doorways indicating a passageway for light or people. Since we look through a window we have a direct association with the eyes. 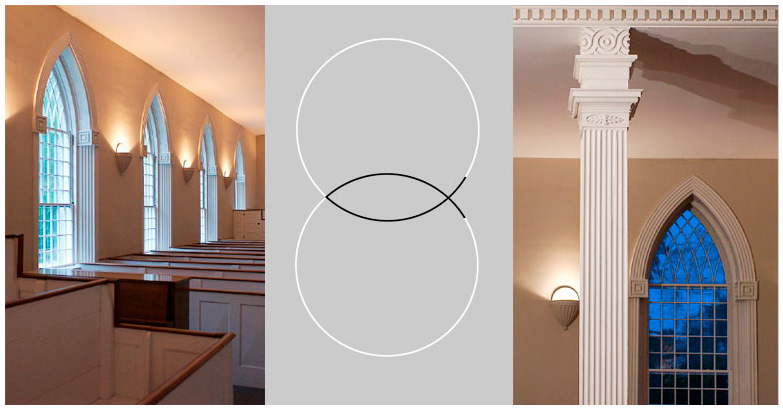 Another form the number two commonly takes is in objects. In the temple, pay close attention to where you see things in pairs.  Solomon’s Temple had two pillars at the entrance to the Holy Place and these pillars even had names: Jachin and Boaz. Pillars can represent witnesses, covenants and man and woman together in marriage.

Some of the most important doctrines from creation to opposition to the relationship between man and woman can all be comprehended and represented within the number two. Two is another fascinating letter in the divine alphabet that can teach us much when understood within the context of the holy temple and scripture.

Awake and arouse your faculties, even to an experiment - Alma 32:27

An introduction to the podcast and a brief dive into symbolism, religious vestments, and a lesson learned from cockroaches. Yes, cockroaches.